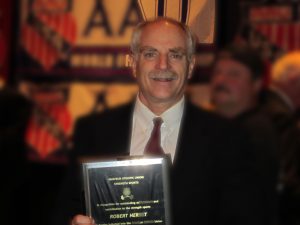 Athletes have long put their names behind worthy causes. As evidenced in the 2016 Espy Awards show, athletes such as LeBron James are using their position as athletes to help others and create social change. This type of goodwill has been going on for years. Just look at the famous story of MLB All Star Roberto Clemente who tragically died in a plane crash in 1972 while delivering aid to earthquake victims in Nicaragua, “he did not just lend his name to the fund-raising activities the way some famous personalities do, he took over the entire thing, arranging for collection points, publicity and the transportation to Nicaragua.” (Jan 2, 1973 NYT Death Announcement)

You don’t have to be a superstar or major leaguer to help, you just have to want to do the right thing and pick up the phone. For example, I single handedly organized a tsunami relief effort for Sri Lanka in 2004-2006. I had met some Sri Lankan powerlifters at a competition in 2003. When the Southeast Asian tsunami hit the next year, it was not just some disaster that occurred a half a world away, but it hit home to me as I actually knew people who might have been harmed, simple powerlifters just like me. After making some calls and sending some e-mails, I was able to get in touch with the coach of the Sri Lankan Army Rugby Team who was also a strength coach and powerlifter. He told me that while none of the lifters had been killed, there had been a lot of property damage. I also realized from watching the news, that while “important” countries like Thailand and Indonesia were getting a lot of help and attention, no one was doing anything for Sri Lanka, so I decided to pick up the ball.

I called the Red Cross, but they said that they could not do anything to help me. I called the UN, but they said they could not help me, but that they would be interested in knowing about what I did after I did it. I called former President Bill Clinton’s office because he had been appointed to spearhead tsunami aid, but his office stopped returning my calls. I think Sri Lanka was too insignificant for them in relation to their photo opportunities at tourist resorts in Thailand. So, I asked donors to pledge money based upon how much I lifted at various powerlifting competitions. I then flew to Sri Lanka at my own expense to distribute the funds I raised at several refugee camps.

The people I met in the camps were very grateful. Their lives had been turned upside down. I met one 15 year old girl who the day before the tsunami hit had been a successful student dreaming about medical school. Afterwards, she was a displaced person living in a tent. The people told me that while foreigners had come and taken photographs, I was the first person to actually do something.

I tried to stretch the money as much as I could, giving each family enough for food for a month of for extras above the subsistence level. One of my most heart wrenching memories was when we left one camp to go to the next one, closing the door of our van on the outstretched hands that were reaching inside for help. I wish I had been able to do more, but at least I had been able to do something.

Today, with the power of social media, we are able to mobilize many people for a cause and do great things. Athletes, and strength athletes in particular, know about fairness and doing the right things. We also have the dedication and discipline to accomplish difficult goals. Together, let’s help fix the world.