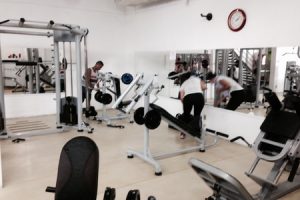 While I have been preparing for my role of supervising the drug testing at the Olympics, I have not lost sight of my own goals in sport as a powerlifter and part of me is already looking past the Olympics.  I remember in October 2012, while competing in the World Championships after helping to run the wrestling venue at the London Olympics that summer, thinking that now it was my turn to be lead to the medal ceremony by officials in blue blazers.

I am aiming for the World Championships November 12.  I competed in the Nationals on June 4 (winning my 21st consecutive, thank you).  This gave me eight weeks before I left for the Olympics.  I have 12 weeks from the end of the Olympics until the Worlds.  Normally, I would have trained light right after the Nationals and worked really hard in the heat of July and August, but with the Olympics now in the middle, I had to change things up.  I looked at my training log for how I handled it in 2012.  I then had to factor in that the Worlds were three weeks earlier then.  Also, my role in the wrestling venue was physically demanding and included things like moving around exercise bikes and 90 kg (198 lb) practice dummies.  My job should be easier in Rio.

In London, I had access to some Olympic weight facilities.  I have not yet been able to arrange that in Rio out of security concerns.  I have instead found a gym in Rio within walking distance of my apartment.  It does not have a website, but it has a Facebook page with lots of pictures with benches in the background.  I am figuring they must have some type of squat rack and some bars where I can do deadlifts.

After putting it all together, I have been training hard in July, with more volume and moderate weights to build a foundation.  It is still taxing, so I will lift up until the day I leave and then spend the first few days in Rio settling in and getting organized-picking up my uniform, getting my accreditation, and undergoing training.  I will then find the gym and start working out light, picking things up as the Olympics progresses.  I will treat the Olympics as active rest, doing bodybuilding exercises and healing up, dealing with an unfamiliar gym, foreign food, and disrupted sleep.  Once I adjust, I hope to begin training heavier so that I can begin to push it by the last week of August after I get back.  I will train really hard in September and then do a peaking cycle in October for the November meet.

This may be too much detail and really boring for you, but it shows the preparation and planning that an athlete should go through if they want to progress in their sport, whether they are preparing for a local meet, the Olympics or a World Championships.  I guaranty you that all of the athletes competing in Rio have been doing that all year.  The difference between me and the Olympians is that they get to be in the Olympics, I have to train around it.