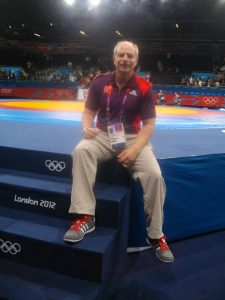 In life, you don’t have to play the hand you are dealt.   Instead, you can change the game.  I know this for a fact because I did it myself by harnessing the power of weight training to give me a healthy and vigorous life; and I know you can too.

When I was a child, I was afflicted with scoliosis which caused one hip to be higher than the other and made my right foot to turn out 90 degrees when I walked or ran.  My lower back was in constant pain.  As a teenager, a doctor told me to never lift anything heavy.  If I had followed the script, I would have faced a sedentary and inactive life filed with pain.

Although I was still young, I instinctively knew that that was not the way to go and decided to ignore the doctors.  I would show them! So I looked at the self-improvement legend of Charles Atlas and the 99 pound weakling who built himself and I was inspired by watching Arnold Schwarzenegger in Pumping Iron.  I thought that rather than sit on the couch with a twisted back, what if I encased my back in muscle to take pressure off my tortured spine?  I went and purchased a York Barbell 110 pound set and changed my life.

I started training diligently several times a week next to the furnace in my mother’s basement.  I did not have a bench press bench, so I lay on an old rug on the cold cement floor and pulled the barbell on top of me.  Even though my back hurt, I stuck with it and kept adding weight and training week and after week.  Soon, I started to notice the changes that were taking place as my body responded to the training.  I got healthier and stronger, and while my spine still corkscrewed around, it did not bother me so much.

I continued to lift as I went off to college and beyond.  I began entering powerlifting competitions and enjoyed the challenge it gave both my mind and body.  It was very satisfying to overcome my limits and perform a personal best.  I also found out that I had become stronger than many. To date, I am a 19 time World Champion and 46 time U.S. National Champion (with an active streak of 27 consecutive wins) and have set 38 world records as well as numerous American records. I have been honored by being inducted into the Amateur Athletic Union (AAU) Strength Sports Hall of Fame and two other Halls of Fame. In 2013, I was semifinalist for the prestigious AAU Sullivan Award given to the nation’s outstanding amateur athlete. Not bad for a guy in his 50s with a crooked back.

While my back still sometimes hurt, my newfound strength and health enabled me to do many things that would have been impossible before.  I became a collegiate wrestler and lacrosse player.  I climbed mountains in the Himalayas in Nepal.  I helped to run the wrestling venue at the London 2012 Olympics, where the athletes and coaches followed my directions because they understood my obvious strength.  I coached my children’s sports teams, keeping up with them in soccer, basketball, hockey, baseball, and lacrosse while other parents stood on the sidelines watching.  Also, after the December 2004 south Asian tsunami, I took it upon myself to help some Sri Lankan powerlifters I had met and singlehandedly organized a tsunami relief effort for Sri Lanka, including asking donors to pledge money based upon how much I lifted at various powerlifting competitions.  I then flew to Sri Lanka at my own expense in the middle of a bloody civil war and distributed the funds I had raised at several refugee camps.  It was the right thing to do.

The discipline and goal setting which weight training required carried over into all facets of my life.  It enabled me to apply myself to my studies and become a Phi Beta Kappa graduate of Trinity College and Salutatorian of my class.  I then had the work ethic to graduate from Columbia Law School.  As an attorney, I have been a law firm partner, worked for Fortune 100 company Pfizer, and been the General Counsel of several public companies.

Based on my life experience, I know that anyone can improve their life like I did through the benefits of exercise and a positive mental attitude.  It is now my passion to give back and help others enjoy the benefits of health and wellness.  I have become an influencer in sport and been quoted as an expert in different magazines and podcasts and have spoken before groups, corporations, and teams.  I was appointed to supervise the drug testing for 23 of the sports at the Rio Olympics.  As a lifetime drug free athlete myself, I understand the concerns of the athletes that the testing process be reliable.  As an attorney and compliance officer, I know the importance of having the testing done properly to protect the integrity of the sport, the athletes, and the Olympic Games.  I am committed to ensuring a fair competition for all.