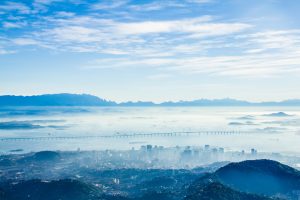 For the 2016 Rio Olympics, I was appointed to supervise the drug testing at the Barra Zone Olympic Park venues. I served as Team Leader for the Doping Control Chaperones, managing the chaperones who escort the athletes and explain to them their rights and responsibilities, and monitored the testing and results. The Barra Zone hosted 23 sports, including such marquee events as swimming, boxing, wrestling, weightlifting, and gymnastics. This is a follow up to my having helped to run the wrestling venue at the London 2012 Olympics.

After London, I wanted to continue to be active in the Olympic movement so I applied for a position in Rio. I think the Rio Organizing Committee thought that with my background as an attorney who has been the General Counsel and Chief Compliance Officer of several public companies, and as a drug tested athlete, I could address the needs and concerns of the individual athletes, as well of the sports and of the Olympics themselves, to protect the process and ensure a level playing field and legitimate and fair completion.

Volunteering at the Olympics was a natural extension of my volunteering passion. I have been a volunteer at many levels in sports, from the most local level to the world stage. I coached my own children’s youth sports such as soccer, hockey, and Little League and officiated at the swimming and soccer at the New York State Empire State Games. I also helped to run the powerlifting venue at the Special Olympics World Games, were held in Westchester, and was the Venue Director of the Basketball at the Maccabi Games. I have been a referee and official at various powerlifting meets and have also become a popular emcee, especially in Europe, where they seem to like my American slang.

In January 2020, The Tokyo Olympic Organizing Committee asked me to be a Doping Control Chaperone and assist the Chaperone Coordinator in the Olympic Village and at several venues.  This would have been similar to my role at Rio 2016 where I helped to supervise the drug testing at the Olympic Village and for 23 sports.  Unfortunately, the 2020 Olympics were postponed to 2021 due to the COVID-19 pandemic.  In March 2021, the Japanese government decreed that there be no international volunteers at the Tokyo Olympics due to the state of emergency in Japan.  They refused to grant me a visa even though I was fully vaccinated with the Pfizer vaccine and willing to tough out their quarantine restrictions.  This was of course very disappointing as I had been preparing for five years to implement the lessons I had learned in Rio to improve the doping control process and ensure a fair and level playing field for the athletes.

I am happy for the athletes that there will be an Olympics in 2021 but frustrated that I will not be there.  I wish them a successful Games and will prepare for Paris 2024 in the hope that the world will be a healthier and happier place by then.