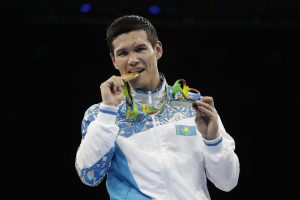 I just sat talking with a Kazakstani 69 kg welterweight gold medal boxer. He will clearly need a lot of stitches inside and out to close the gash over his right eye near his nose. He sat hunched over, cradling the gold medal with his hands between his knees, staring at the medal. I read to him the inscription on the medal, explaining what XXXI Olympiad meant. He told me that when he was a boy of nine, he watched the boxing at the Sydney Olympics in 2000 and said to himself that he was going to be a gold medalist. He said to me in his best English, “dreams do come true”. I nodded. There was nothing else we needed to say