While world television audiences were enjoying the sports performances at the Rio Olympics on television and commentators were saying that maybe the Rio Organizing Committee was going to pull the Olympics off after all, those of us charged with administering the drug testing regime were confronted with what people had been concerned about ever since Rio had been awarded the 2016 Games: a lack of organization and resources .  As reported by observers from the World Anti Doping Agency (the “Report”), Latest News | World Anti-Doping Agency
https://www.wada–ama.org/en/media/news

the anti-doping regime was hampered by organizational and other difficulties which resulted in having fewer than 50% of scheduled athletes being tested, often because the athletes to be tested could not ever be located.  The Report found that the chaperones who were supposed to notify and monitor the athletes to be tested were poorly trained, not given enough information, and sometimes not even fed.  The Report determined that there were  “a number of serious failings” in the anti-doping programme, which was so under‑resourced, badly designed and poorly administered that it was strained “close to the breaking point” and would have “almost certainly collapsed” if it had not been for the “initiative, tenacity and professionalism” of the men and women working on the ground during the Games.  It concluded that  “it was only due to the enormous resourcefulness and goodwill of some key doping control personnel working at the Games that the process did not break down entirely”.  As Team Leader for the chaperones in the Olympic Village, I consider myself to be among that group.
From my first day at the Games, I saw that the anti-doping scheme, and the chaperones in particular, were behind the eight ball.  My colleagues  I did our best to soldier through, but we had to candidly tell the WADA observers the state of things.  After my first week at the Games, I was required to take a day off (Brazilian law prohibits someone from working more than six days in a row), but instead of  sightseeing, I spent the day writing a report at WADA’s request. This was not easy task on a little Blackberry.  It is very gratifying though to see that many of my recommendations were adopted in the Report, such as putting a chip in the athletes’ accreditation and chip readers throughout the Athletes Village to help chaperones locate athletes, giving  chaperones pictures of the athletes, adding automation to the process so that we would have a data base where we could update the status of athletes chosen for testing, and giving the chaperones better training so that they would have the language skills and confidence to cope with pushback from the different delegations.
It is my hope that the organizers of Tokyo 2020 will learn from our experiences in Rio and follow the recommendations in the Report.  As an athlete myself, I am glad I was able to contribute to the Report and help to ensure fair competition and protect the integrity of the Olympic Games. 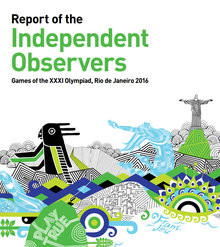